Human rights are not Ads neither commercials or pr campaigns. Great thinkers left a record of their thoughts; today some Citizens in Europe are protecting the Meaning and the Results.

“WE ARE ALL BORN FREE AND EQUAL”
《人人生而自由,在尊严和权利上一律平等。》

Human Rights Watch is one of the world’s leading independent organizations dedicated to defending and protecting human rights. By focusing international attention where human rights are violated, we give voice to the oppressed and hold oppressors accountable for their crimes. The rigorous, objective investigations and strategic, targeted advocacy build intense pressure for action and raise the cost of human rights abuse. For more than 30 years, Human Rights Watch has worked tenaciously to lay the legal and moral groundwork for deep-rooted change and has fought to bring greater justice and security to people around the world.

The Declaration of the Rights of Man and of the Citizen (French: Déclaration des droits de l'homme et du citoyen) is a fundamental document of the French Revolution, defining the individual and collective rights of all the estates of the realm as universal. Influenced by the doctrine of "natural right", the rights of man are held to be universal: valid at all times and in every place, pertaining to human nature itself.

This is The Declaration of the Rights of Man and of the Citizen was approved by the National Constituent Assembly of France, 26 August 1789. Autor: Jean-Jacques-François Le Barbier (1738 – 1826) 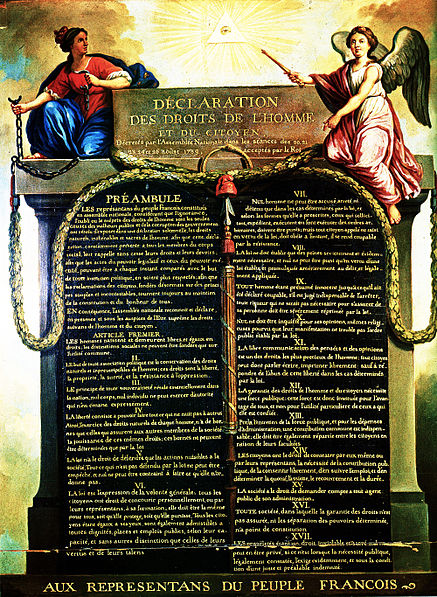 Whereas recognition of the inherent dignity and of the equal and inalienable rights of all members of the human family is the foundation of freedom, justice and peace in the world;

Whereas disregard and contempt for human rights have resulted in barbarous acts which have outraged the conscience of mankind, and the advent of a world in which human beings shall enjoy freedom of speech and belief and freedom from fear and want has been proclaimed as the highest aspiration of the common people;

Whereas it is essential, if man is not to be compelled to have recourse, as a last resort, to rebellion against tyranny and oppression, that human rights should be protected by the rule of law, Whereas it is essential to promote the development of friendly relations between nations, Whereas the peoples of the United Nations have in the Charter reaffirmed their faith in fundamental human rights, in the dignity and worth of the human person and in the equal rights of men and women and have determined to promote social progress and better standards of life in larger freedom,

Whereas Member States have pledged themselves to achieve, in co-operation with the United Nations Naciones Unidas - 联合国, the promotion of universal respect for and observance of human rights and fundamental freedoms,

Whereas a common understanding of these rights and freedoms is of the greatest importance for the full realization of this pledge,

THIS UNIVERSAL DECLARATION OF HUMAN RIGHTS


as a common standard of achievement for all peoples and all nations, to the end that every individual and every organ of society, keeping this Declaration constantly in mind, shall strive by teaching and education to promote respect for these rights and freedoms and by progressive measures, national and international, to secure their universal and effective recognition and observance, both among the peoples of Member States themselves and among the peoples of territories under their jurisdiction.

"If you have knowledge, why you must keep it by yourself. You must share it, i think..."

"Wikipedia, possibly the greatest idea of the Computer Age."

Imagine a world mundo 世界 in which every single person persona 公民 (Chinese Language) on the planet is given free access to the sum of all human knowledge Conocimiento Humano. That's what we're doing.

Many visitors come to Wikipedia to acquire knowledge, others to share knowledge. Anyone can contribute to Wikipedia by clicking on the Edit this page tab in an article. Before beginning to contribute, however, read some handy helping tools such as the tutorial and the policies and guidelines, as well as our welcome page. It is important to realize that in contributing to Wikipedia, users are expected to be civil and neutral, respecting all points of view, and only add verifiable and factual information rather than personal views and opinions.

Wikipedia is written by open and transparent consensus: We're already taking back the Internet. With your help, we can take back the world. (Wikimedia Foundation)

The word that Classical Greek Philosophers used for pointing to "encyclopedia" - 百科全書 Literally: All of the books for one-hundred academic disciplines. was "ἐνκύκλιos παιδεία", which means «instruction in a circle», (well-rounded) education.

The free news source you can write 人人可編輯的自由新聞源

The History of Internet

The Wikipedia was over for one day in XXI, The History of Internet. It is called The Wikipedia blackout. The message was: It was about knowledge. Help us keep lights shining brightly. 維基百科黑掉了

The video says: Come my friends. More info: Wikipedia and the Blackoutpage (text in English).

The Wikipedia blackout is over — and you have spoken. More than 162 million people saw our message asking if you could imagine a world without free knowledge. You said no. You shut down Congress’s switchboards. You melted their servers. From all around the world your messages dominated social media and the news. Millions of people have spoken in defense of a free and open Internet. For us, this is not about money. It’s about knowledge. As a community of authors, editors, photographers, and programmers, we invite everyone to share and build upon our work. Our mission is to empower and engage people to document the sum of all human knowledge, and to make it available to all humanity, in perpetuity. We care passionately about the rights of authors, because we are authors. SOPA and PIPA are not dead: they are waiting in the shadows. What happened in those 24 hours, though, is extraordinary. The internet has enabled creativity, knowledge, and innovation to shine, and as Wikipedia went dark, you've directed your energy to protecting it. We’re turning the lights back on. Help us keep them shining brightly.

INTERFACE BETWEEN HUMAN BEING AND MACHINE.

An historic day. Human being interacting with an Electronic Object. Video starts at 1:32.

On December 9, 1968, Douglas C. Engelbart - 道格拉斯·恩格尔巴特 and the group of 17 researchers working with him in the Augmentation Research Center at Stanford Research Institute in Menlo Park, CA, presented a 90-minute live public demonstration of the online system, NLS, they had been working on since 1962. The public presentation was a session in the of the Fall Joint Computer Conference held at the Convention Center in San Francisco, and it was attended by about 1,000 computer professionals. This was the public debut of the computer mouse Computer Mouse - 鼠标. But the mouse was only one of many innovations demonstrated that day, including hypertext, Hipertexto - 统一资源定位符 (url) object addressing and dynamic file linking, as well as shared-screen collaboration involving two persons at different sites communicating over a network with audio and video interface.

Quite an impressive video, the birth of Interactive Epistemology, a new disciple in Philosophy. Douglas starts to talk at minute 1:32.

Internet Society (ISOC) 中国互联网协会 The Internet Society or ISOC is an international, non-profit organization founded in 1992 to provide leadership in Internet related standards, education, and policy. It states that its mission is "to assure the open development, evolution and use of the Internet for the benefit of all people throughout the world"
What is the Internet? While it may seem like a simple question, defining the Internet - 互联网 isn’t easy. Because unlike any other technology, the Internet can be whatever we make it. We can shape it. We can mold it. But most importantly, we can use it to connect people, communities, and countries around the world.
The Internet Society also encourages innovation and fresh thinking by providing grants and rewards to relevant initiatives and outreach efforts that address the humanitarian, educational and societal contexts of online connectivity.. ISOC. ISOC - SPANISH CHAPTER

Alan Turing 艾伦·图灵 was an English mathematician, philosopher, logician, cryptanalyst, and computer scientist. He proposed to consider the question 'Can machines think? (read here text Mind (1950). He devised a number of techniques for breaking Nazi German ciphers, including the method of the bombe, an electromechanical machine that could find settings for the Nazi Enigma machine , and WON.

Alan Turing efforts helps the brave and idealistic double agent Spaniard Pujol, who decided to become a spy for the Allies as a way to do something "for the good of humanity".
Alan Turing had a key role in the success of Operation Fortitude, the deception operation intended to mislead the Nazis about the timing and location of the invasion of Normandy near the end of the war. The false information the Spanish Pujol supplied helped persuade Nazi intelligence that the main attack would be in the Pas de Calais, keeping two armoured divisions and 19 infantry divisions there for two months after the Normandy invasion.
(Turing Lecture: London - From cryptanalysis to cognitive neuroscience.)

In the name of Freedom, the Philosopher Alan Turing and his friends made a unique impact on the history of computing, computer science, artificial intelligence, developmental biology, and the mathematical theory of computability and IA. LIBERTÉ, ÉGALITÉ, FRATERNITÉ, SÉCURITÉ